Home › Media › International › Rohingya crisis is a test case for all

Rohingya crisis is a test case for all

Rohingya crisis is a test case for all 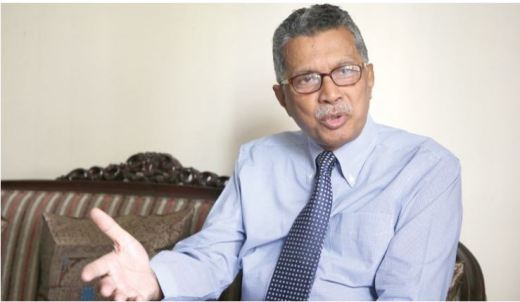 The UN has definitely stumbled in dealing with the Rohingya issues and Bangladesh’s friendship with other countries has been tested in this crisis, Bangladesh Enterprise Institute vice-president Humayun Kabir says in an interview with New Age.

For Bangladesh diplomacy, this is quite a challenging time, Kabir, a former ambassador and secretary at the Ministry of Foreign Affairs, says.‘Because there are larger issues beyond the humanitarian face of the Rohingya crisis, we have seen our friendship with other countries tested,’ he notes.

How would you relate recent flows of Buddhists, Khumi and other ethnic community people into Bangladesh from Myanmar with the process of repatriation of Rohingyas to the country?

Rohingyas come to Bangladesh as local environment in Myanmar is hostile, both in Rakhine and in other parts of the country. What we see now is that members of other ethnic communities are coming into Bangladesh as a result of protracted conflicts.

What is important here for a sustainable, safe and dignified return of the Rohingyas is also linked to creation of an enabling, safe and peaceful environment within Myanmar. That now relates to both the Rohingyas and the communities coming to Bangladesh as a result of conflict in Myanmar.

What preconditions do you think must be ensured for enabling environment for sustainable return of Myanmar nationals?

It needs building up an inclusive state with presentation of all communities and giving them rights to live in Myanmar as dignified citizens of their country. Depending too much on a mono-dimensional interpretation of nationalism can create difficulties that have been proved many a time and in many countries.

For example, Bangladesh is largely a Muslim majority country. But people of other religions and communities are also part of our national fabric in making an inclusive and participatory nationalism, in which everyone will have equal opportunities.

We are in the vicinity of Myanmar and we can offer them lesson on building an inclusive state and creating opportunities for all people in economic growth and other development processes.

There is an impression among people that the world in general and the UN in particular have failed in tackling the Rohingya crisis to stop atrocities in Myanmar. What do you think?

I would not say that this kind of criticism does not exist. But look at the realities on the ground. We’ve been observing many other places in the world. The UN is an organisation by member states. So when we are to make a judgement on the UN, we need to keep in mind that it reflects instincts and policies of the member states.

I see the UN in two layers — one where the secretary general and other UN offices sit. In that places, the UN speaks about the Rohingya crisis quite strongly about atrocities in Myanmar and efforts are on to make people responsible for the crimes accountable.

They extended support both to Bangladesh and Myanmar for creating an enabling environment for return of victims.
When we see the member-based UN, there we see some challenges. Some countries have indeed maintained certain stances which have not been that helpful to resolve the crisis.

Some members in the UN Security Council are not comfortable about going the whole hog to hold accountable and press Myanmar to compel them to take back the Rohingya people.

The international environment is a fluid area. There, perhaps, we need to do more work to get the membership-based UN more active so that it can contribute to the solution of this problem.  On that count, if the UN has failed, I would say that it is a mixed one. I would not say that the US has failed, but the UN has definitely stumbled. I believe, at the interests of the international community we all should help the UN to become successful in resolving the crisis.

How do you see the role of China, a big friend of Bangladesh and which has strategic relations including investments in many areas?

China is playing a nuanced game. We cannot say that China is against the repatriation of Rohingya people. But the question is if China is doing what it could do to help us on the issue. China wants Bangladesh and Myanmar to solve this problem bilaterally. But we know solving it bilaterally would not be easy, and there I think some pressure or persuasion on Myanmar could be perhaps helpful. China could play a positive role on this aspect, and I still believe China can act on that, which is not for Rohingyas alone, it is also important for China’s own interests to maintain peace and stability in the region.

Now we are talking about Asian century in which China is the leader. China has a huge strategic and economic stakes both in Bangladesh and Myanmar and in South Asia. A peaceful South Asia and South East Asia could benefit China and the two regions. Rohingya could be a test case for China from this aspect.

How do you see the role of the US, which considers itself the global leader?

As for leadership of the world, the US has been sending mixed signals over last several years. The US has withdrawn from the TPP, a major economic instrument and system. They now come up with an Indo-Pacific Strategy.

They, however, have taken strong position on the Rohingya issue and fully supported the point of safe return of the community. They want to hold people accountable. They have imposed sanctions on a section of Myanmar persons found involved in atrocities in Rakhine.

But in terms of global priority, we understand that the US has certain limitations and the US does not want to put much pressure on Myanmar lest it should go into further hold of China. The US is in fact playing a balancing game here.

But I see the US’s overall role on the issue has been positive, and I believe that the US can still put in coordination with India and Japan much pressure on Myanmar for facilitating rightful return of Rohingya from security, strategic and economic interests of America.

What do you think about role of the EU and its member countries?

We should not take the Rohingya crisis as a zero-some game as all can gain as the Europeans can work with China, Americans can work India and Japan as solution to the crisis is not that difficult. The only thing is Myanmar needs to understand the reality on the ground as they cannot deny their own people and they cannot disenfranchise their own people. They cannot deprive them of citizenship and other rights.

ASEAN is a little handicapped in the matter. Initially, Indonesia and Malaysia were quite open, but we understand that ASEAN has been following a non-interfering principle in the internal affairs of the member states.

But I still believe ASEAN could perhaps take some pro-active role here as this is not a problem for Bangladesh and Myanmar only. It could [adversely] affect the other ASEAN member States as well as there are risks for anybody from possible desperate acts from Rohingyas.

How do you assess the role of India, next door neighbour to both Bangladesh and Myanmar?

India has been playing a safe game as they are acting on the humanitarian side. We hear that they are supporting the Bangladesh position, but in terms of putting pressure on Myanmar, they are playing on both sides. I understand that for India it is a difficult situation as they want to safeguard their strategic and economic interests.

We, however, expect India to play a moral role here persuading Myanmar to see the light of the day in a sense that an unresolved Rohingya crisis would create difficulty for all of us.

How do you assess diplomatic and other steps the Bangladesh government has taken so far to face the crisis?

The government has been quite active. The government has become initially successful in pursuing Myanmar to accept that the Rohingyas are from Myanmar. They in principle accepted the fact that they should take them back, although they are providing some barriers putting in the verification process. There, I believe, Bangladesh diplomacy has seen some degree of success. But diplomacy is a dynamic process and the crisis we are facing is itself continually evolving.

There we need to continue to remain innovative in terms of diplomacy and explore extra grounds until this problem is resolved.  For Bangladesh diplomacy, this is a quite challenging time. Because, there are larger issues beyond the humanitarian face of the Rohingya crisis, as we have seen our friendship with other countries tested.

In the evolving contexts, we need to think afresh on how to manage the regional environment in our benefit. There I think we need to update our understanding, increase our efficiency and the level of our effectiveness.

This is not only for Rohingya issue, it is also important for our engagements in South Asia and maintaining our economic and strategic interests at the global levels.